For children 4 and over (family audiences)

6 and over (school groups)

“Celestial Mechanics … is in reality an amazing “objet d’art” … participants enter the House of Time as if penetrating an ephemeral apparition – you must plunge in unhesitatingly before it disappears. … the sets are impeccable, magnetizing and totally outside of time … A tiny gem to be discovered on your own or with little ones.”

“There are plenty of smiles where Mr. Time lives, because you can take as long as you need to contemplate the world in a new light, to wonder, savour and simply have fun. The guides to this universe, actors Jonathan Gagnon and Marianne Marceau, are magnificent in their open, spontaneous and beautifully timed performance. And Frédéric Lebrasseur’s enchanting music lends subtle colour to the visit.”

“It’s absolutely charming! And Jonathan Gagnon and Marianne Marceau deserve loud ‘bravos!’ for helping us to see the world through the eyes of children, to see it in another light […] It’s a show full of enchantment […] Those behind the show had faith that children would respond to beauty.”

“This weekend run, don’t walk, to see Celestial Mechanics, a new offering from the Théâtre des Confettis. This sublime installation-show without words by Claudie Gagnon is so far my personal favourite in the festival.”

WRITE US to obtain a press kit or any other document related to this production. 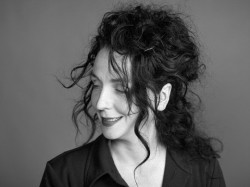 There are the heavens.

In the heavens, there are the stars, the comets and the planets.

And there is the earth.

On the earth, there are the oceans, mountains and forests.

In the oceans, there are great blue whales and tiny pink shrimp.

On the mountains, there are eternal snows that time has forgotten,

made of millions of little snowflakes, each one different from the other.

In the forests, there are leafy trees that shelter all kinds of wonderful birds and shy animals and bright-coloured butterflies.

There are also roads and streets and alleyways with houses along them.

In the houses, there are we humans – little grains of sand in the universe – with the gift of being able to prolong all these marvels through our imagination. And when imagination is combined with another gift, called creativity, we can endlessly reinterpret the world and its incomparable treasures.

And there is time.

Time that lends movement to all the rest.

Time that makes the world go round, as well as the days and nights, the seasons and the hands of clocks.

Time that has us blow out the candles on a new birthday cake each year, as a way of celebrating life.  Claudie Gagnon

Combining the visual arts, theatre and music, Celestial Mechanics is a show without words intended for children aged 4 and up (general public) and 6 and up (school group). For school presentations, the installation-show can accommodate audiences of 110, while audiences for public performances should not exceed 100.

The show commences with spectators being invited into an imaginative, playful space. Then, passing through the great doorway of Time, they wander along a corridor, stopping as they go to peer into various curiosity cabinets, before arriving at an amphitheatre where a musician-bird awaits them. When the audience is assembled, the curtain rises on a little stage on which two actors and a musician present a series of “tableaux vivants”, or small sketches. At the end of the performance, the audience is led along another corridor lined with more curiosity cabinets to an exit area where the visit to Time wraps up.

For Celestial Mechanics, the space as a whole (entrance, corridors and amphiteatre) was designed at child-scale; however, adults can walk about in it comfortably and sit in the small performance area.

As long as the venue provides a play area and is sufficiently quiet for the show to be performed properly, the show can be presented in any large space (theatre stage, exhibition hall, etc.)

It is strictly unauthorized to copy, modify, reproduce or use this recording without written permission.

It is strictly unauthorized to copy, modify, reproduce or use this recording without written permission.

In Goodies, Beasties and Sweethearts, interdisciplinary artist Claudie Gagnon invited children to actually enter a giant cake – now in her latest creation, we enter the world of Time…

A door opens. Like Alice, you step through the looking glass.

Tick-tock… One by one, children enter Time. Step by step, they discover the wonders, both large and small, that Time has patiently crafted to make our world.

Tick-tock… At the end of the passageway, the children find a little theatre. But who is this funny bird, waiting for them under a starry sky? Like a mechanic, he turns the wheels of Time. Like a magician, he opens windows onto the changing seasons. And as a musician, he lets the Universe be heard and reveals some of its secrets. For, if you’ve never been a scarecrow, you haven’t really experienced the autumn wind. If you’ve never slept under the stars, you don’t know that they can turn into diamonds. And if you’ve never entered a cuckoo clock, you have no idea what a party goes on when the hour has rung and the little cuckoo’s door has closed!

Tick-tock… Celestial Mechanics is all that and much, much more.